The ruthless fights and rich history of a major piece of real estate in Mombasa.

As I am sure you all are aware, Mombasa is an island at the head of Makupa Creek on the East Coast of Africa and is the second city of Kenya. The island has been fought over for centuries. I find it odd that we have such a rich history in an island that was inhabited by westerners long before the rest of East Africa.

Fort Jesus is a major fortification situated on a high coral bluff overlooking the entrance to the Old Port of Mombasa. It is a UNESCO World Heritage site and one of the most outstanding examples of 16th Century Portuguese military fortifications, and a landmark in the history of this type of construction. The Fort was built by the Portuguese between 1593 and 1596 by Giovanni Battista. He designed the fort to withstand attacks from the sea and from the land as Mombasa island was the only vestige of westernized land in the area, and there were many local tribes that wanted to take over this prime piece of real estate.

In 1498 Vasco De Gama arrived in Mombasa trying to forge his ocean trade route to India, he sailed on and reached Calicut, dubbed City of Spices. The city has since been renamed Kozhikode.

However, Vasco De Gama had not reckoned on the already vibrant trade running along the East Coast of Africa from Mozambique to the tip of the horn of Africa. Everyone wanted a piece of the action. Vasco De Gama’s plan was to get the spices from India, so cutting off the Silk Road, and the ivory from the coast of Africa, then head back to Portugal to trade the very valuable cargo.

The Turkish had other ideas and fought the Portuguese over the trade route for nearly one hundred years. It was in 1585 and 1588 when the Turkish attacked the Portuguese garrison in Malindi, a coastal town about 50 miles North of Mombasa, that they decided a fortification was needed not only to protect them from the raids but also as a sign they had conquered the coastline.

All was quiet for about fifty years then in 1631 Muhammed Yusif, who had been educated in Goa, entered the fort, and massacred the whole Portuguese population of Mombasa, consisting of 45 men, 35 women and 70 children. The Sultan Muhammed Yusif kept the fort for a year then decided a life on the ocean waves as a pirate was much more profitable, so abandoned the fort. The Portuguese then came back later that year and marched into a deserted fort.

The next to come along was the Sultan of Oman who sacked the town of Mombasa  but left the fort alone. The Portuguese in the fort did nothing to help the local Swahili inhabitants. Then in 1696 a large Omani Arab force came to Fort Jesus and put it under siege at that time the fort had a garrison of between 50 and 70 Portuguese soldiers and several hundred loyal Coastal Arabs. The fort was relieved later in the year but unfortunately, the saviors’ brought the plague with them and all the soldiers and the local Arabs died. So, by 1697 Fort Jesus was in the hands of Sheikh Daud of Faza with another 17 members of his family and some 58 Africans.

At the end of 1697, a Portuguese boat arrived and threw the Sheikh and his family out who then turned around and put together a force with other Omani Arabs and put the fort back under siege. This went on for two years and nine months. The siege ended as there was only a Captain and nine men left of the Portuguese garrison and they had not been relieved at all during this time. Although there is a freshwater well inside Fort Jesus there is no space to grow any food so conditions must have been awful during the two years. When the Omani Arabs saw that the few soldiers were weak from disease, they made a final attack and retook the fort. Amazingly just seven days after the Omani Arabs took the fort a large relief fleet of Portuguese boats arrived, but it was too late. With Fort Jesus under the command of the Arabs, the whole coast of Kenya and Tanzania with the islands of Zanzibar and Pemba fell into the hands of the Omani Arabs.

The Portuguese did not give up and retook the fort in 1728 mainly because the African soldiers in the fort mutinied against their Omani oppressors. The Sultan of Pate, an island near Lamu, handed Fort Jesus over to the Portuguese who kept it for another year or so.

During this whole time, the town of Mombasa was becoming a major route for spices, ivory and slaves and had become very rich. The Old Town of Mombasa is still famous for spices mostly brought from Zanzibar. The narrow streets and high building offer an insight into how things used to be. The shops spill out onto the street and you can buy frankincense, cardamoms, fine cloth and gold in the small shops called ‘Dukas’. 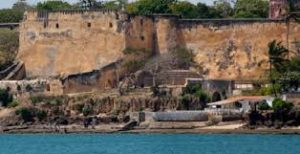 The fort was swapped between the Governor of Mombasa and the Omanis several times over the next one hundred years depending on who was holding the most local power.

Then in 1824, the English started to stick their noses in as they had decided that Kenya was going to be a protectorate, and the island of Mombasa was their foothold on the continent. It would be another seventy years before the Lunatic Express would be built which was the topic of an earlier newsletter and can be read at https://stevebrakerbooks.com/the-lunatic-express/ if you would like to catch up on that bit of Kenyan/Anglo history.

The English finally took over Fort Jesus in 1895, a year before the Anglo-Zanzibar War which is listed as the shortest war in history lasting just 45 minutes, but that is another story.

The British used Fort Jesus as a prison and an administration block for many years. The area around Fort Jesus has the original British courts, then a museum, and then back to the Mombasa Appeal Court as the building was designed so well. There is a beautiful baobab tree that sits just after treasury roundabout which is very close to Fort Jesus. This tree must have a circumference of at least forty feet. Baobabs of this girth are usually around 1 to 2 thousand years old. Whenever I pass this magnificent tree, I wonder at all the history that has walked under its branches. The Portuguese in their plumes and feather, the Omanis with their flowing robes and silks, and the Swahilis with their kikois and kanzus. It must have seen some wonderful sites.

I was lucky enough to be allowed to dive just outside Fort Jesus in the channel between the entrance and the Old Port of Mombasa. The visibility is very bad, but we were able to see skeletons of old wooden ships that had long since been sunk, maybe by the cannons of the fort.

I hope you enjoyed this historical timeline of Fort Jesus and in a way the city of Mombasa. If you ever visit Kenya, I would strongly advise a city tour including Old Town and Fort Jesus. The street food is great around old town too!

You can get a good idea of the layout of Fort Jesus by watching this YouTube Video https://www.youtube.com/watch?v=SwUqfeok7U8

Old Town can be seen with this lovely Vlog by African Tigress : https://www.youtube.com/watch?v=8oArWUfHIOw

Written and researched by Steve Braker an author of action and adventure books based on the East African coast. If you would like to find out more please go to my web site.