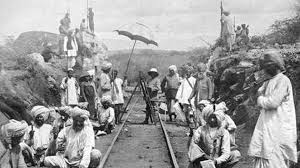 This is one of those strange stories where an African country gets dragged into European or Worldwide politics. Kenya had been going about its own business for many millenniums. The Portuguese came and tried to conquer, but then went home after the Dark Continent kicked their asses. There are so many books to write about this place it’s unbelievable!

Then along came the English, the Germans and the Italians who decided this part of the world needed looking after. So, Queen Victoria and her mates got the map out and drew some nice straight lines across it declaring who now owned which bit! One story goes that the Queen and the Kaiser both wanted a mountain on the equator with snow on the top. The Kaiser got Kilimanjaro and the Queen got Mount Kenya.

Anyway, I digress, 1895, George Whitehouse was commissioned with the job of creating a railway line from the coastal city of Mombasa all the way to Lake Victoria, which had been named by another uninvited British explorer called Speke in 1858. Before that date, the local Luo tribe called it Lolwe. But Speke in his true British arrogant way decided that from 1858 onwards it was to be called Lake Victoria. This railway was also called the Ugandan Railway as its destination was supposed to be in Uganda, but this never happened either!

Now George had a big job on his hands. In those days as soon as he left the island of Mombasa he was in the tropical jungle we remember from the old Tarzan movies, people of my age used to watch when we were kids. The route was just over 600 miles long (965 KM) which is still a major journey today! He also had to cross wide-open African plains which were inhabited by the local, often warring, tribes.

The first problem Whitehouse had to face was the complete lack of manufacturing in East Africa. Everything had to be shipped in, mainly from India. Whitehouse then had to find labour. The Africans that he came across had never even heard of employed labour and wages. They had no understanding of a working day/week. Another issue George had to overcome was that Kenya had no actual currency. It was decided that Kenya would use the Indian Rupee as a currency, but this was not the end of George’s labour problems. He obviously had no skilled labour as no one in Kenya or for that matter East Africa had ever even seen a train before. Also, the natives did not understand money and wanted something more tangible for their daily efforts. This led to Whitehouse importing what was then called ‘coolies’ from India to do most of the construction work. A considerable amount of the Indians that were brought to Kenya to build the railway remained afterwards. Their descendants became prominent business figures, mainly in the coastal region.

The project had to entertain jungles, rivers, wild animals, warring tribes, mosquito-infested swamps, and the Great Rift Valley, to complete the 600-mile journey. What is amazing is it took the engineers of that time only six years to reach Lake Victoria, which was an engineering feat of the time and still would be today. In 1899 the section of the Lunatic line from the coast reached the halfway point which was a rail depot called Nairobi. Unfortunately, this point was in a mosquito-infested swamp which often flooded. The town quickly grew, as it had an important railhead, and replaced the original capital of Kenya, Machakos. After independence in 1963, Nairobi became the capital of the Republic of Kenya.

The project ran out of money on several occasions. A young upstart of a politician, Sir Winston Churchill, stepped in and fought for the project in the Houses of Parliament in London. His belief was if he could control the waters at the head of the Nile then he could control Egypt. This of course later turned out to be nonsense, as the Nile has many different sources, Lake Victoria being only one.

However, in 1902 the railhead reached Port Florence on the shores of Lake Victoria. The new rail head was called Kisumu which in the local Luo language means a place to barter. A fitting name for a new town built at the head of the most ambitious colonial engineering project in Kenya. This was a new beginning and opened up trade along the whole 600 miles of the track.

I travelled on this wonderfully archaic railway on many occasions when I first came to Kenya. We would all arrive late in the afternoon at Mombasa station, as the train left at around 4 pm if you were lucky. The carriages were a delightful return to the past with the old-fashioned compartments and sliding wooden doors. I remember my kids loving the old diesel engines and sliding the windows open to look at the open African plains, as we chugged past. If the train was on time it went through Tsavo just before dusk. The kids would look out for Elephants and Rothschild Giraffes out for their evening meal. Dinner was a wonderful three-course meal served in the dining car by white-jacketed waiters. Then the bar was opened for us all to chat and have a few beers. While we sat at the bar our carriage was converted into bunk beds for the long night passage. If we were lucky we would wake up in Nairobi main station at around 6 am the following morning. However, the train often broke down, so we would be able to have a lovely breakfast on the train while we waited for the repair. Life was a lot slower in those days.

Unfortunately, the railway fell into disrepair over the last twenty years and then about three years ago was replaced by the modern S.G.R railway we now have. The seats are plastic, and there are no white-jacketed waiters or sleeping compartments and the journey takes barely six hours from Nairobi to Mombasa. It is a wonderful step forward for Kenya’s development, but I do miss the old slower days chugging along the line knowing the journey could take one, two or three days.

This beautiful story spawned the movie ‘The Ghost and the Darkness’, released in 1996. The movie concentrated on the section of the railway that went through an area of Tsavo which had man-eating lions. It’s a good film and well worth watching. This is the Wikipedia page for the film https://en.wikipedia.org/wiki/The_Ghost_and_the_Darkness. There is also a nice documentary on YouTube at this link: https://www.youtube.com/watch?v=RSZX5jYf4AA.

The book the Lunatic Express is still for sale on Amazon the link for Amazon.com is https://www.amazon.com/dp/B00ZUS3N7Y/

I am an action adventure author living in Mombasa, Kenya, East Africa. I write books based on the history of this wonderful continent and my experiences living here for the last twenty years. I have a free book for anyone who would like to sample my writing just click FREE BOOK.

I would love to hear from you with regard to this short article or anything else you would like to discuss. You can email me on [email protected]. I look forward to hearing from you.